Crucial Blast release the debut EP by SNARES OF SIXES on May 5th 2017. Created by Jason Walton, founding member of now defunct Agalloch it is entitled  Yeast Mother: An Electroacoustic Mass. 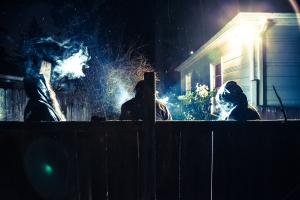 While renowned for his work as bassist for Agalloch and Sculptured, Jason Walton has also frequently ventured into other, stranger and more experimental regions over the past two decades, offering a range of baffling and captivatingly weird sounds with bands like Self Spiller, Especially Likely Sloth, and Nothing. And it’s in that latter territory that we find this debut EP.  Snares Of Sixes dliver a bold and confounding introduction, tangling the listener in confusing, highly aggressive avant-prog. The genre-shredding sound taps into a warped confluence of frenzied King Crimson-esque progressive rock, faint traces of frayed, heavily mutated black metal, haunting atmospheric touches, and abrasive electronics, and the result leaves the listener deliriously disoriented.

Often difficult, frequently nightmarish, this easily ranks as one of Walton’s more challenging and oblique offerings, and for the listeners, one of his most fascinating. The four tracker features Marius Sjøli and Robert Hunter (Hollow Branches), Andy Winter (Winds), Pete Lee (Lawnmower Deth), Nathanaël Larochette (Musk Ox), and Don Anderson (Agalloch, Sculptured), among others. Recorded all over the world, the record was mixed at Earth in Sound Studios by Jason Walton, mastered by James Plotkin, and features graphics by Marius Sjoli and artwork by Aesop Dekker.

Five years ago, in a period of downtime from the band Agalloch, Jason Walton wanted to write a strange and abrasive record; the aim was to record an album that pushed on the paradigms within metal. The result is a cohesive and challenging album that draws from seemingly disparate ideas and styles. Initially slated be a full-length album, Walton realized that he complexity and density of the material encourages listening in small dosage.

With tracks like “Urine Hive”, “Lions To Leeches”, “The Mother’s Throat”, Walton and company lurch through an escalating, ever-shifting frenzy of creepy, labyrinthine melody and pummeling percussive chaos, over-modulated riffing and schizophrenic time signatures, where android mutterings give way to hideous blackened shrieks and bouts of bizarre crooning, the sound stitched with veins of crushing metallic heaviness, fragments of fractured electronica, and an overall surreal animated alternate reality vibe as it reaches towards the menacing glitched-out tech-metal hallucination of “Retroperistalsis” that closes the EP.

The contributors to the release are:

The remarkable EP will be featured on Sonic Attack 207

Regular writing and podcasting about music View all posts by HalfEdgeMedia

This site uses Akismet to reduce spam. Learn how your comment data is processed.